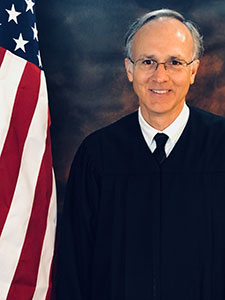 Jim McCune began serving the people of Marion County, Florida, as a County Court Judge on March 1, 2002. He was appointed by Governor Jeb Bush. In 2004, 2010 and 2016, he was elected to serve full 6-year terms. He is a graduate of Washington & Lee University in Virginia [Bachelor of Arts], Valparaiso University School of Law in Indiana [Juris Doctor] and Emory University School of Law in Georgia [Master of Laws]. He was admitted to practice law in Indiana in 1982, in Florida in 1984 and in Texas in 1997. Jim was an Assistant State Attorney in Florida’s 5th Judicial Circuit for 13 years before becoming a judge. At the State Attorney’s Office, Jim supervised the Public Interest Unit for 6 years and prosecuted the Circuit’s economic crimes, crimes against the elderly, environmental crimes and crimes involving public officials. He also worked for 6 years as a murder prosecutor assigned to the Circuit’s death penalty cases. Before joining the State Attorney’s Office, Jim worked for 3 years as a Law Clerk for a Justice of the Indiana Supreme Court in Indianapolis and for 2 ½ years as a Florida Assistant Attorney General handling civil RICO cases throughout Florida. Jim grew up in Montclair, New Jersey, and graduated from Montclair High School. Jim is married to Jessica who is a 3rd generation Texan.

Jim McCune works for the improvement of the courts system in Marion County. In particular, Jim led the planning and launch of a Mental Health Court for Marion County in 2009 and a Veterans Treatment Court in 2012. Jim presided over the Mental Health Court until September 2014 and presided over the Veteran’s Treatment Court until November 2019. As part of his planning for the Veterans Treatment Court, Jim was selected and participated in the Joint Civilian Orientation Conference sponsored by the U.S. Secretary of Defense in 2011. He also spent a week in Buffalo, New York, as part of a team from Marion County working with those who started the nation’s first Veterans Court to plan for the Marion County Veterans Court. Jim  served for many years as the Administrative County Court Judge for Marion County.

*NOTICE TO THE PUBLIC:* The Code of Judicial Conduct governing behavior by judges forbids the Judges of the Fifth Judicial Circuit to discuss pending cases with the public. Please do not call the Court expecting to speak with a Judge about any case. The Court is only allowed to consider arguments made in the courtroom and in documents properly filed by actual parties in the case as authorized by law and the Rules of Court. The Court cannot ethically read or consider any other opinions or arguments about the case. Communications that do not meet these legal requirements cannot be forwarded to the Judges.